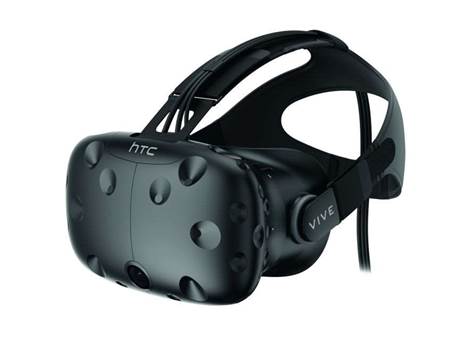 Removing yourself from the Vive’s virtual worlds is an odd, disorientating experience. Despite the fantastic worlds into which you’re submerged it’s so realistic it’s unnerving. While the Vive may not be the product that brings VR into living rooms around the land, it heralds the beginning of something beautiful.

That’s despite the Vive being something of an ugly duckling among the major VR headsets. Sony’s PlayStation VR looks futuristic, and the Oculus Rift has slimmed down and ditched the plastic for a fabric-wrapped shell, but HTC’s device maintains a pock-marked exterior and looks pudgy in comparison.

As soon as you hold the Vive in your hands, though, it’s clear you’re dealing with a premium product. The plastic shell is soft and warm to the touch, the controllers feel smooth and light, and while the pockmarks remain for tracking purposes, they’ve been smoothed out to create a headset with a style all of its own.

It’s worth noting that the Vive’s core specifications haven’t changed since it was first unveiled. It still has twin 1,200 x 1,080 OLED displays, two laser-emitting beacon modules to track you within a space up to 4 x 4m, and two motion controllers to replicate your hands within VR experiences. Despite having an identical resolution to the Oculus Rift, which relies on far smaller lenses, the Vive’s Fresnel lenses produce a sharper, clearer picture. This makes all the difference when you’re deep into a VR experience. The colours are bright and crisp, and there’s little to no ghosting of the image. Text isn’t always clearly readable, but that’s largely down to individual pieces of software rather than the Vive itself.

The Oculus Quest is getting controller-free hand tracking this week, by Cameron Faulkner

These Lenses Work Better Than The Human Eye, Can Revolutionize VR/AR Headsets, Cameras, by Leah Yecla